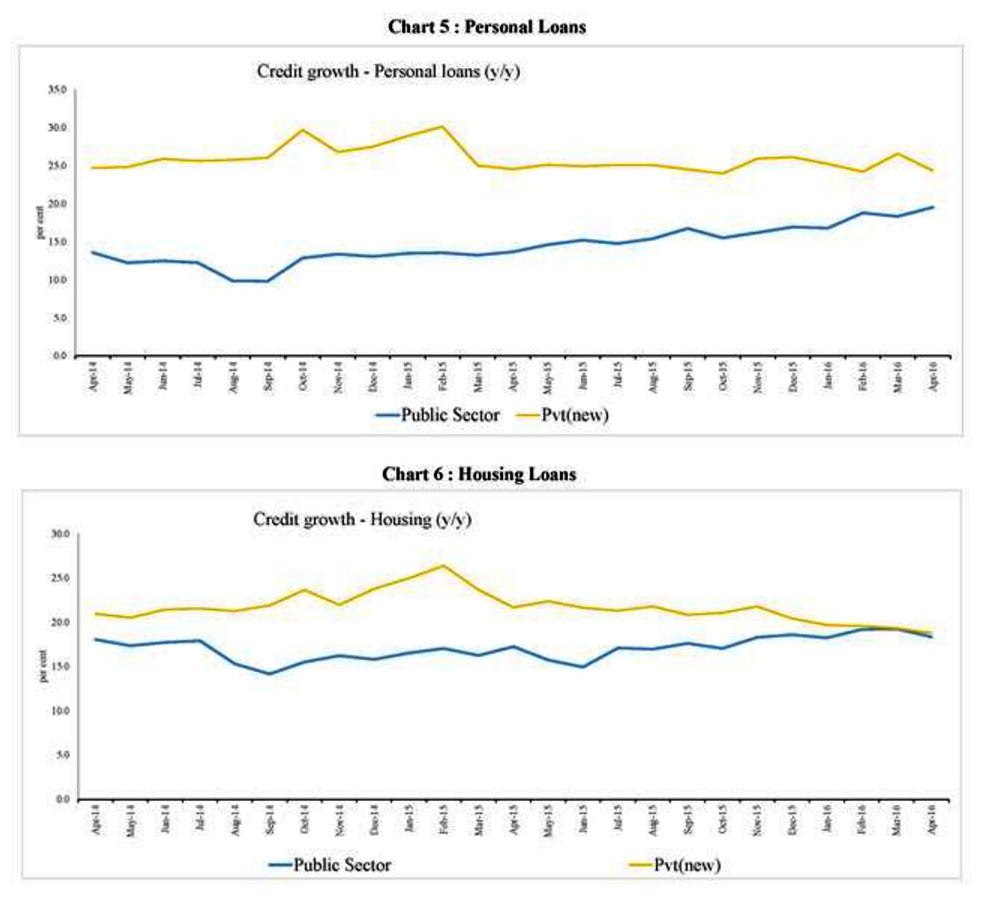 Images from: ‘Why have bad loans been made?’: Full text of Raghuram Rajan’s speech to Assocham

What one can easily make out from these charts is the huge difference between credit growth of the public sector and private sector banks - for non-food credit growth, credit to industry, credit to micro and small enterprises and credit to agriculture.

This is surprising but yes, private sector banks have lent more to agriculture than public sector banks.

But if you look at the charts for Personal and Housing loans, the difference is minimal.

Since the housing and personal credit growth was rising, it implies that public sector banks did have the money to lend and the downward trend seen in the charts above was not due to lack of capital.

Let’s start with the first cause: In 2007 before the recession, a strong growing trend was seen in the economy. The investors wanted to scale up their projects and expand; for this, they required additional financing and expected that the economy will grow just like it did previously. The banks too freely lent to these project without carrying out proper checks at their end.

But then in 2008 as a result of the financial crisis, things went downhill. Many of these projects which started with extended financing stalled.

Then, we could also factor in the fact that private banks do not lend heavily to industries like steel and manufacturing which were in a bad shape and are not growing post-2008. This could be one of the reasons for the downward trend. Since public sector banks lent to these industries and the borrowers could not pay back, the banks suffered because of NPAs

Another reason in a few cases was corruption and undue influence which affected lending decisions. Some companies were involved in fraud as well. Promoters would set up shell companies offshore and show inflated values of imports. To pay for these inflated costs, the companies would seek loans. But these were minor cases compared to the bad decisions taken by the banks of not carrying out proper checks.

In many cases, the public sector banks did not carry out the necessary background checks. Often when the lending was done by a consortium of banks, the smaller banks depended on the background checks carried out by the lead Bank. Thus, the banks did not carry out checks on their own. These are some of the bad management practices by the public sector banks.

Another thing that happened was with projects getting delayed the investors started requesting banks to infuse more capital into the projects with the hope that the project can be turned around with the increased funding. In return for the additional funding, banks were given part ownership of the project. And the terms of financing were re-negotiated. This is what we had referred to earlier as the restructuring of loans.

The banks also need to recognise and classify the loans based on their quality as good loans, bad loans, loans that can be recovered partially and unrecoverable loans. Incorrect classification is also a major cause for the rise of NPAs.

The bank has to have realistic estimates of expected growth and potential risks. Since loan classification was not in place, lending to good loans was not continued. If this was done the stalled projects could be revived and the banks could profit from such projects

Another important reason for irresponsible decisions could be the short tenure of chiefs of the public sector banks. When the tenure of managers, in short, it becomes as a distorted incentive and the easier way out happens to be to push the reforms to the tenure of the next person. Also, the review of the Manager’s decisions by external agencies and vigilance committees prompt the managers to not take risks of strong decisions which could help clean ups in the long run.

Also, the banks also did not have a buffer set aside for absorption of losses. Some sort of a rainy day fund would have helped in absorbing losses from bad loans.

However, you must also remember that during the economic crisis the situation of the industries is bad due to external factors and since the economy itself suffers it is very difficult for the industries to revive themselves and turn profitable. This is the reason that when RBI had submitted a list of defaulters to the supreme court it had asked for the list to be kept confidential because many of these defaults may be genuine cases where a revival was difficult because of a bad economy for no fault of the industrialist.

All of these gradually and eventually led to the NPA problem as we know it today.

PREVIOUSMy thoughts on the 'Designation' for Chota-Mota Entrepreneurs
NEXTI want to get started with learning Computational Materials Science. What do I do?
Search